This week’s episode kicked off with Kenny Williams and Amir Jordan vs. Aichner and Barthel. And once again, we had a lively crowd. They were fully supporting the dancing for Amir Jordan, more than usual. There was also a lot of ‘Nien!’outburst in regards to Barthel. Williams had a very impressive outing and probably the most impressive out of the four for the match. Something I was not expecting beforehand. Williams reversed the gorilla press/brain-buster combo into a roll up for the win. Of all moves he just had to reverse THAT one. . . Good overall match though. 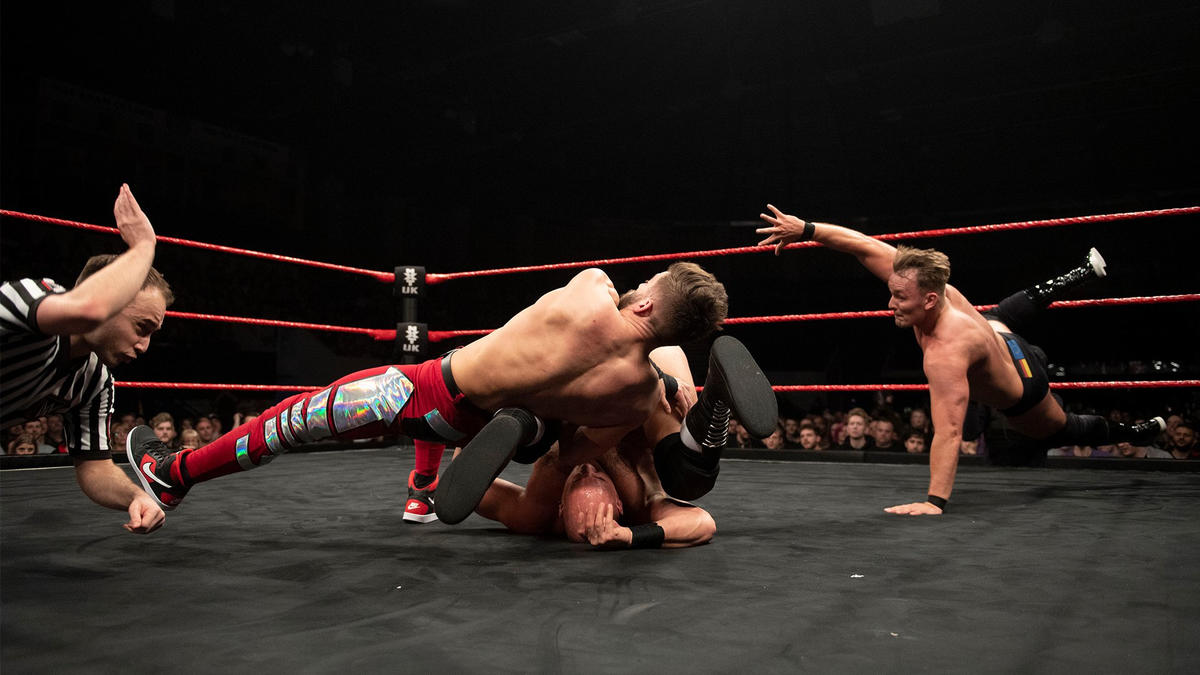 After the match, Rhea Ripley enters backstage and says she let Piper Niven off easy last week since it was her debut and that she is going to make NXT UK her worst nightmare. In the following segment, Jordan Devlin interrupts Johnny Saint and Sid Scala being interviewed and starts his own interview. He wants to know why WALTER is getting a title shot over him. Scala’s responds by saying the contract has already been signed. Devlin advises he will be keeping a close eye on the match. Devlin took the words right out of my mouth with this promo. I personally think he’s the best thing going right now with the brand.

The second match of the show was Isla Dawn vs. Kay Lee Ray. Not a bad match, but also not really any stand out moments. With the exception of Kay Lee Ray’s finisher where she delivered a massive open-hand slap followed by a super kick and then into a Gory Special Bomb. I can’t get over the slaps she gives. There were a lot of people in the crowd with their mouths open after she delivered it. So was mine. 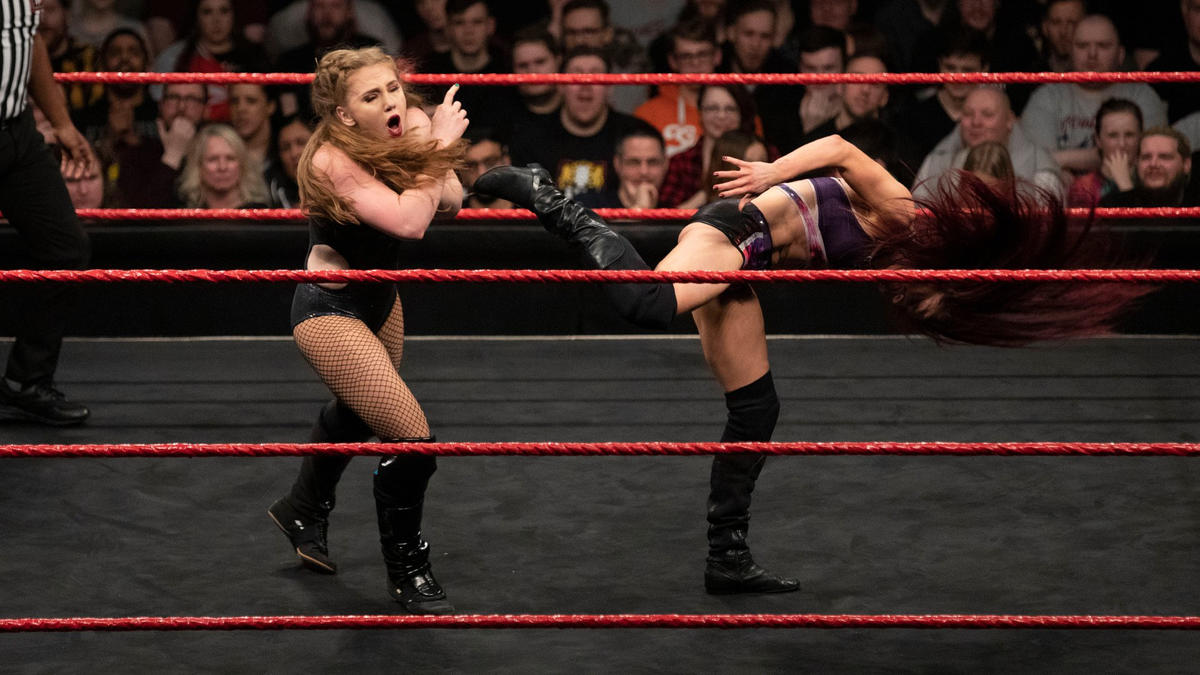 There was a good amount of promo time after the match. First up was for Toni Storm. But as soon as she uttered her first word she was attacked by Jinny. Next was Travis Banks. He said he used to respect Kassius Ohno but now only sees bitterness and is now challenging Ohno to a match. The final promo of the bunch was for the Grizzled Young Veterans. But for this segment, the tag champs came to the ring to talk. And by that I mean Gibson did 100% of the talking. . . again. As soon as the champs came out, half the audience had their shoes up in the air. And as soon as Gibson started talking on the mic, the ENTIRE crowd started chanting, “If you hate Gibson – shoes off”. We also got the returning “ass face” chants for Drake. The crowd did not stop through the entire segment. Gibson, though, has mastered talking over this and embraces the hate as good as anyone. He did want to comment that they have a chip on their shoulders. It’s because the wrong talent is being supported and called out Kenny Williams and Amir Jordan. Gibson ends his speech saying they will soon be the most important champions in all of WWE.

For the main event we got Trent Seven vs. Joe Coffey. Wolfgang and Mark walked out with Joe but didn’t accompany him to the ring. Throughout the match Coffey worked on Seven’s lower back. Which eventually caught up with him. Coffey kicked out of the Seven Star lariat near the end of the match. Which is something I can’t think of seeing in recent memory. After struggling with the lower back pain throughout the match, Coffey got Seven to submit with a Boston crab. Which sucked all the energy out of the audience. After the match, there was no sign of the other Gallus members. I’m still wondering what is the point of this faction if they are never helping each other. 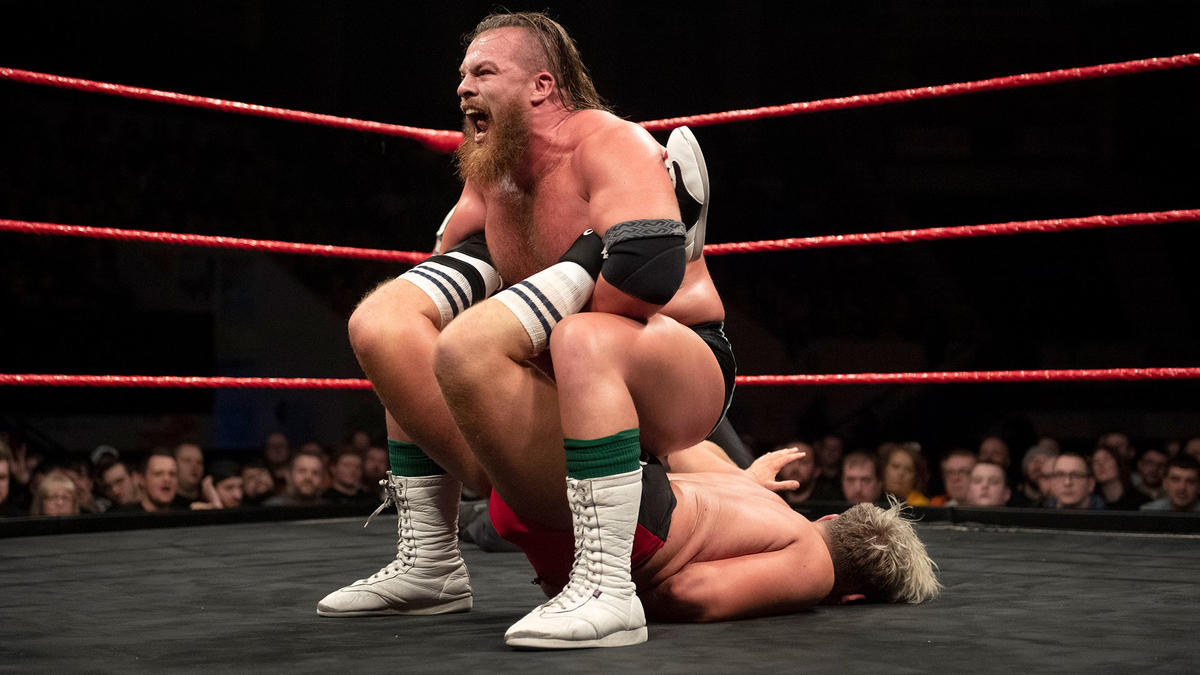 And that wraps it up for this week’s NXT UK as we head into WrestleMania weekend. Where Pete Dunne puts his title on the line against WALTER at NXT TakeOver: New York. Next week there have already been three matches announced with Travis Banks vs. Kassius Ohno, Toni Storm vs. Jinny for the Women’s Title, and Piper Niven in her NXT UK debut match. Thanks for reading, enjoy WrestleMania weekend, and long live wrestling!