This week’s episode started off with Mark and Joe Coffey vs. Raul Mendoza and Humberto Carrillo. And I got to say, this was not the show’s best outing. There didn’t seem to be a lot of people in the crowd either. On top of that, the crowd wasn’t that active throughout the show. The opening match didn’t really have any highlights. Mendoza had a small flurry of moves when he got tagged in but that faded quick. The Coffey brothers came out with the win after Joe delivered his discuss clothesline. 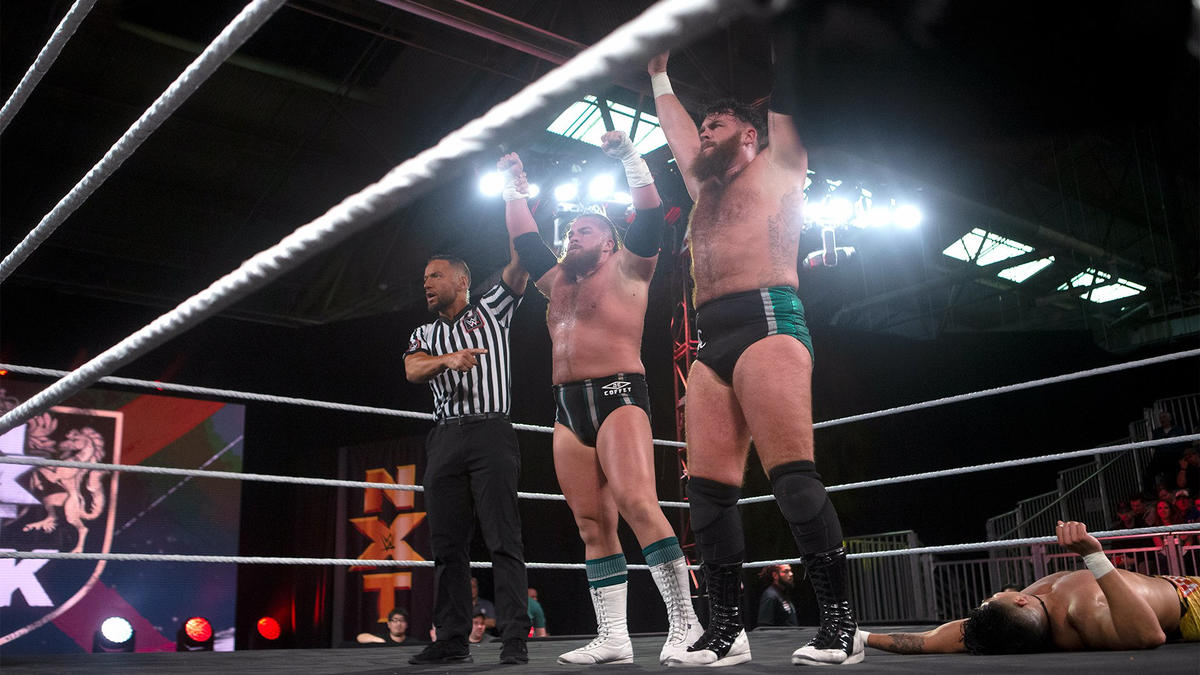 After the match was a promo for Kassius Ohno. And a great one at that. Ohno corrects his interviewer for pronouncing his name wrong. He said things haven’t gone perfect but says even a broke clock is right twice a day. Ohno calls out Ligero. He mentions he isn’t impressed that Ligero wrestled 300 matches last year and says that Kassius Ohno is quality over quantity.

Following that was a segment of random people from the roster talking about how awesome the WALTER  vs. Pete Dunne match was at TakeOver: New York. Barthel and Aichner said they didn’t have an opinion. Then Jordan Devlin says he could care less. Which after that comment, WALTER comes up and stares down Devlin then walks off. You know, I don’t think anybody else deserves a shot at the title more than Devlin. But there is no way WALTER is going to lose the belt on his first defense. And Devlin has already lost once during a title shot against Dunne. Which kind of sucks that he is going to lose two straight for the title. But oh well, what can you do?

The second match of the show was Kona Reeves vs. Dave Mastiff. I’m not understanding Reeves’ shtick here. He’s apparently ‘the finest’ but so far from what I’ve seen in his matches, he really doesn’t have much offense. And he gets nothing but boos. This match didn’t last too long. Mastiff wins with a drop kick into the turnbuckle followed by his running cannonball. 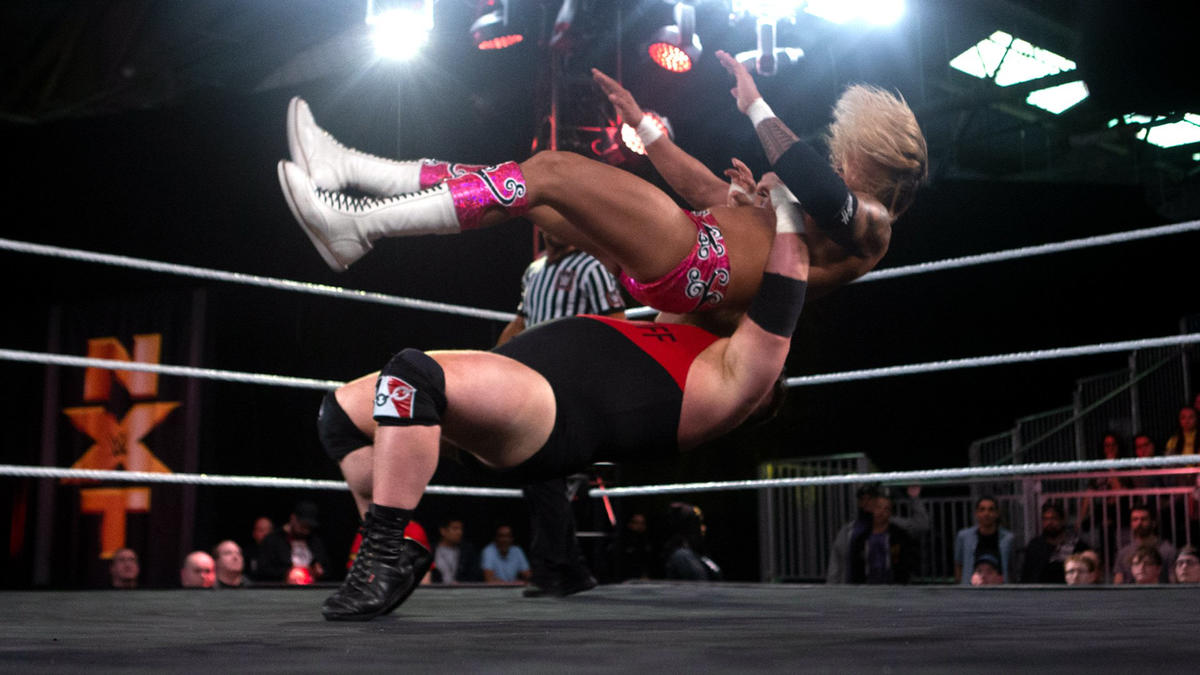 There was a handful of promos after the match. First off was a spot for Morgan Webster and Mark Andrews. They are excited to face Moustache Mountain next week and want to become the first Welsh champions in the history of WWE. Next was an interview with Mastiff backstage after his match. Wolfgang interrupts and they start getting into shoving match which quickly gets broken up. Call me crazy, but wouldn’t Wolfgang have gotten the upper hand on this if his fellow Gallus members were there by his side?

The next match was Kacy Catanzaro vs. Rhea Ripley. And finally the crowd started to come alive for this one. This match wasn’t long but Catanzaro was full of entertainment while it lasted. Ripley eventually came out on top with the Riptide. Before leaving the ring though, Ripley decided she wasn’t done yet with Catanzaro and put her in the inverted cloverleaf for good measure. 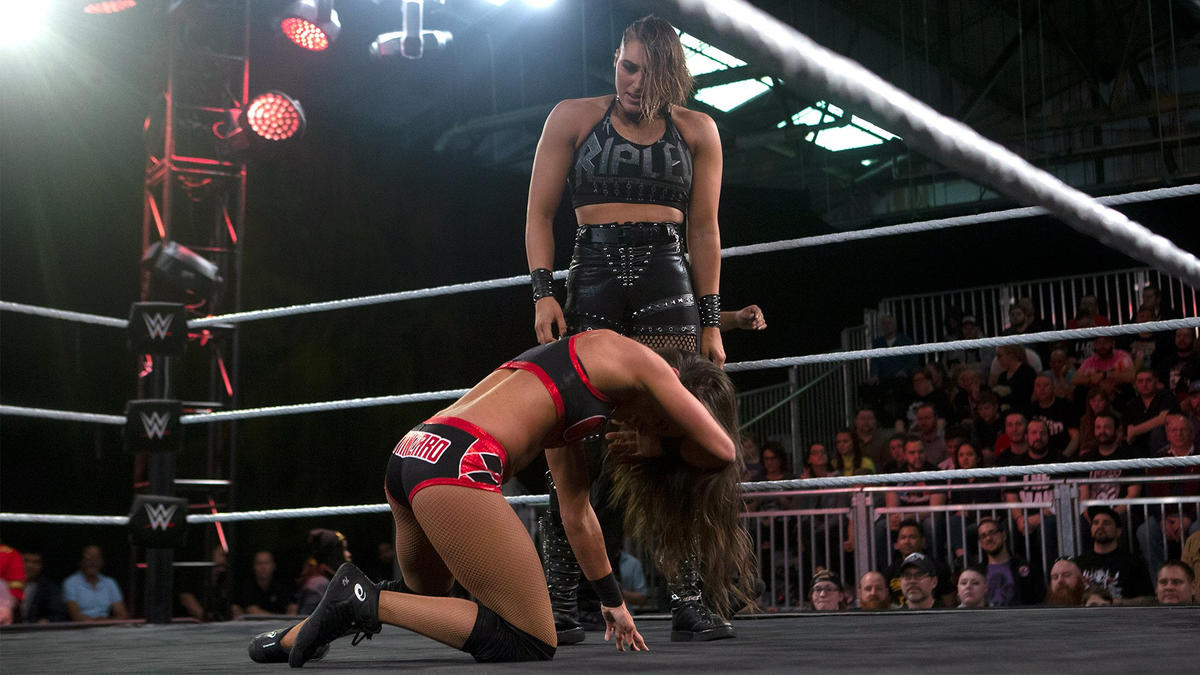 After the match was a couple of promos. The first was Ripley confronting Catanzaro while she was icing her back due to the inverted cloverleaf. Ripley advises her that this is what happens when you step into her division. Piper Niven walks in and silences Ripley and walks off while Niven checks on Catanzaro. The second segment is for Jinny. She is asked if she has a message for us since we haven’t heard from her since her match with Toni Storm. Jinny responds by giving a death stare then walking off. On a side note, I don’t know if this was planned but as soon as Jinny gave her stare you could hear Undertaker’s bell intro in the background . It was a pretty amusing coincidence that made a me a giggle a bit.

Finally we had our main event of the night as the Grizzled Young Veterans took on Kenny Williams and Amir Jordan in a non title match. The crowd was probably at their most vocal here when Gibson got on the mic before the match. But it wasn’t the usual ranting. The crowd just didn’t seem to be invested in the show. This was also the only match of the night where all competitors were on the NXT UK roster. That being said, this was an overall good match. The announcers reminded us that this is Gibson’s first match back from bursting an ear drum. This would come into play during the match. There was a part near the end of the match where Gibson injured his ear, basically leaving Drake in a handicap match. Williams and Jordan would capitalize on this and almost won the match but Gibson dragged Drake out of the ring before getting pinned, taking the count out. 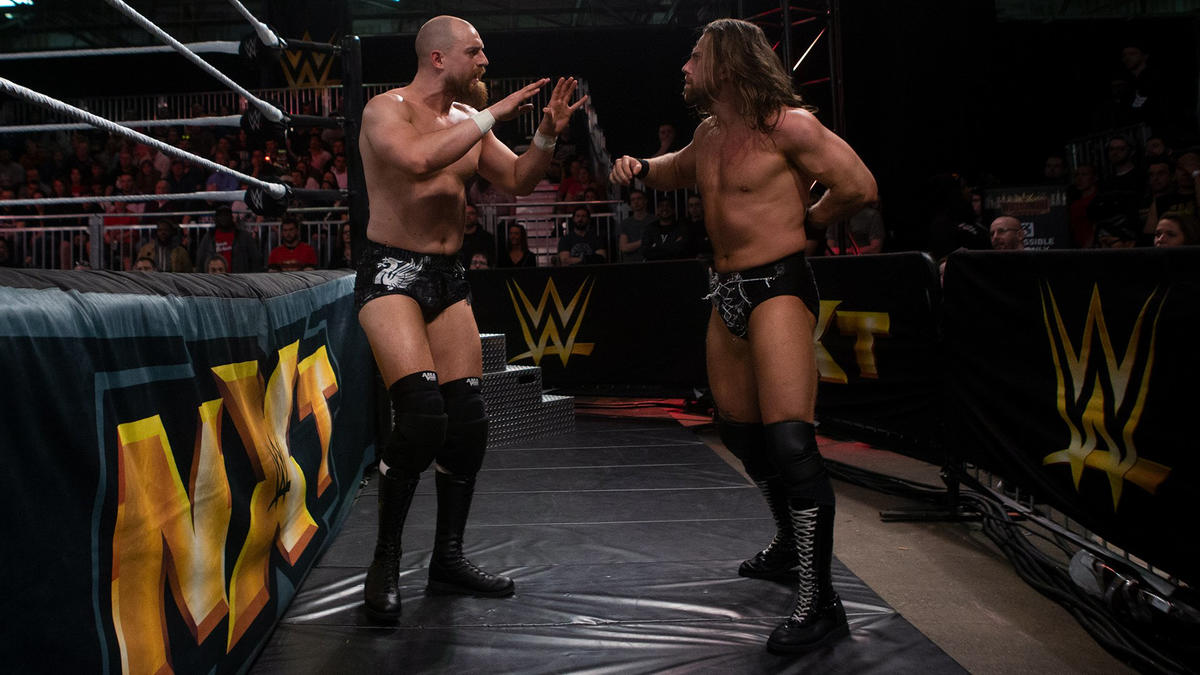 After the match was a promo for Pete Dunne. He is asked what’s next for him now that he is no longer the champ. Dunne said he isn’t walking away from this and says he wants a rematch for the title.

And that wraps it up for this week’s episode. We didn’t get NXT UK at it’s best this time around but next week we have Kassius Ohno vs. Ligero and also Moustache Mountain vs. Morgan Webster and Mark Andrews. So we should be getting a quick rebound here. Thanks for reading and long live wrestling!