Last week was such a great start to the Live era of NXT, and this week continued that momentum as NXT marches to competition with All Elite Wrestling next week! Here is how this week went down.

We started the week off with the Undisputed standing high above the Full Sail crowd, holding their titles above the commentator table. We are certainly in a new era of NXT, and this was certainly a display of who NXT will be showcasing as we head to the big week next week. 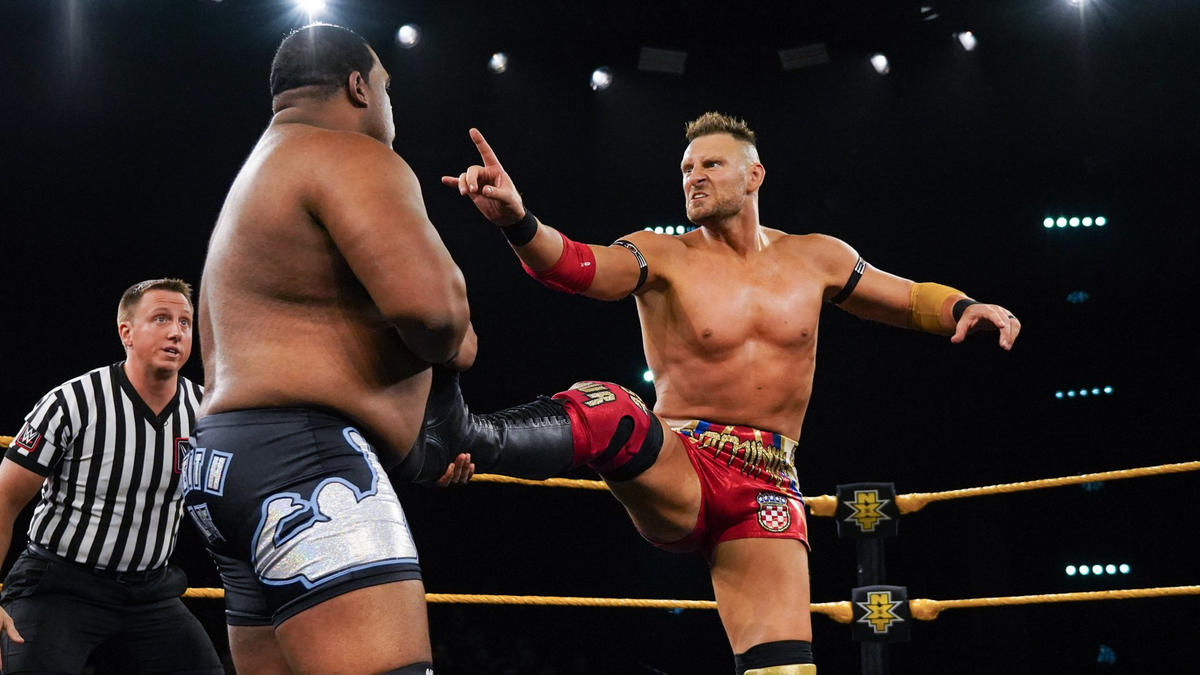 Anyone who has read my reviews since joining knows that the feud between these two has been one of my favorite things that NXT has given us in 2019. Both of these men can be very easily introduced into the NXT title picture, and round 3 of their feud certainly displayed that.

Just like their first two matchups, both of these men defied what men of their size are ‘supposed’ to do in the ring. In this one, we saw Keith Lee nail a corkscrew to the outside of the ring and a moonsault. On top of that, Dijakovic hit Lee with a top rope Canadian Destroyer. I’ll let those sink in for a minute.

Dijakovic found himself in a little bit of a Twitter war with Kenny Omega this week, where Omega referred to the NXT stars as ‘Dark Match Material.’ This matchup certainly showed that these guys are much more than that. Keith Lee finally got in the win column after a little bit of struggle since this feud started. NXT has done an outstanding job these first two weeks of the Live Era with starting the show with an outstanding match, almost as though it is a PPV event. I don’t want this feud to end, and where they are tied, I don’t see it ending quite yet.

Next up are the highlights of the mess that ended NXT last week. William Regal gave the incentive to Riddle and Dain that the winner faces Adam Cole on October 2nd. Maybe we will actually see these two compete in a match instead of a mess.

Very good to see Dakota Kai back in the ring. For those that don’t remember, she was finally getting some momentum in the Women’s Division before tearing her ACL. While this match certainly wasn’t an amazing match like the one before it, it showed us exactly what Dakota Kai can bring to the table as she pulled off a big win against Taynara. Certainly more to come for Dakota.

Cathy Kelley announces that Imperium will take on KUSHIDA and two partners of his choosing. That certainly will be a huge matchup, potentially a 6-Man Tag Match I can buy into! 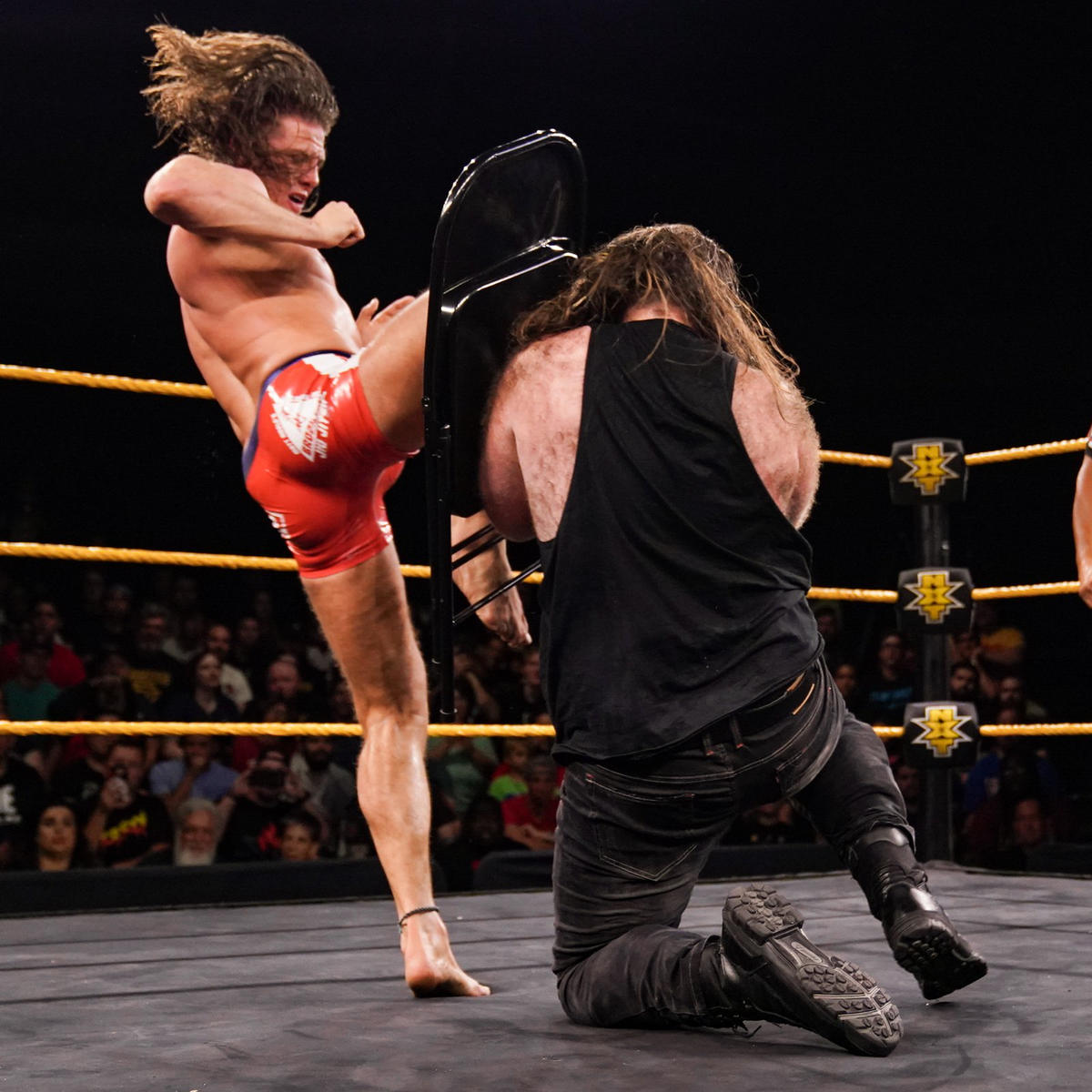 To call the first two meetings between these two a ‘schmoz’ would be an understatement. I think a lot of the reason I can’t buy into this feud is the horrible meshing of their styles. Dain looked so clumsy taking Riddle’s quick striking offense. On the flip-side, Dain’s nimble but powerful offense comes off sloppy against Riddle.

With this being a Street Fight, I was surprised at how long we stayed in the ring, as I was waiting for it to breakdown. It finally did, as the two stars battled their way around Full Sail Live.

The match looked like it was going to be over when Dain drove Riddle through a wall. After that, though, we went to commercial where Matt Riddle apparently was able to recover and drive Dain through a table as soon as we returned. Riddle eventually was able to ground Dain with some heavy offense, and ultimately get the Beast of Belfast to tap out to an Armbar.

Almost immediately, Adam Cole made his way down to the ring. He showed Riddle the title and let him know that Riddle isn’t in Cole’s league. The Original Bro was not having any part of that, as he locked Cole in an Armbar, forcing the leader of the Undisputed Era to tap.

Every time I think there is going to be a quick Jobber match, NXT comes out and surprises me. Kayden Carter jumped right into the match with some offense, grounding Ripley for a brief moment. In fact, Carter actually had a lot of momentum for much of the start of the match. It was quickly vanquished, as Ripley was able to get the victory.

We are now on our 3rd team name the former 2.0. I’ve been excited for Ever-Rise to hit the scene, as I was at Full Sail when they debuted in a dark match, at the time being called Team 3.0. NXT has an opportunity to showcase a the strong Tag Team Division they have, especially once they are up against a Tag Team heavy AEW.

Oney Lorcan continues to be a Jobber to the Stars, but somehow is able to look strong in the process. He spent a lot of the match facing a double-team attack from Ever-Rise as Burch had to stay in his corner and watch.

Despite being separated for much of the match, Lorcan was able to make the hot-tag to Burch who used his hard-hitting offense to eventually gain the victory for his team. This was a great display of Tag Team Wrestling, along with giving Oney Lorcan a good comeback after taking the loss to Lio Rush last week.

After the match we see Deonna Purrazzo and Chelsea Green at ringside. Exciting to see these two, as they are outstanding stars that can provide some major depth to the Women’s division. They have had some great 2nd and 3rd tier feuds, but now with two hours of programming, we can get some meaningful action moving forward. 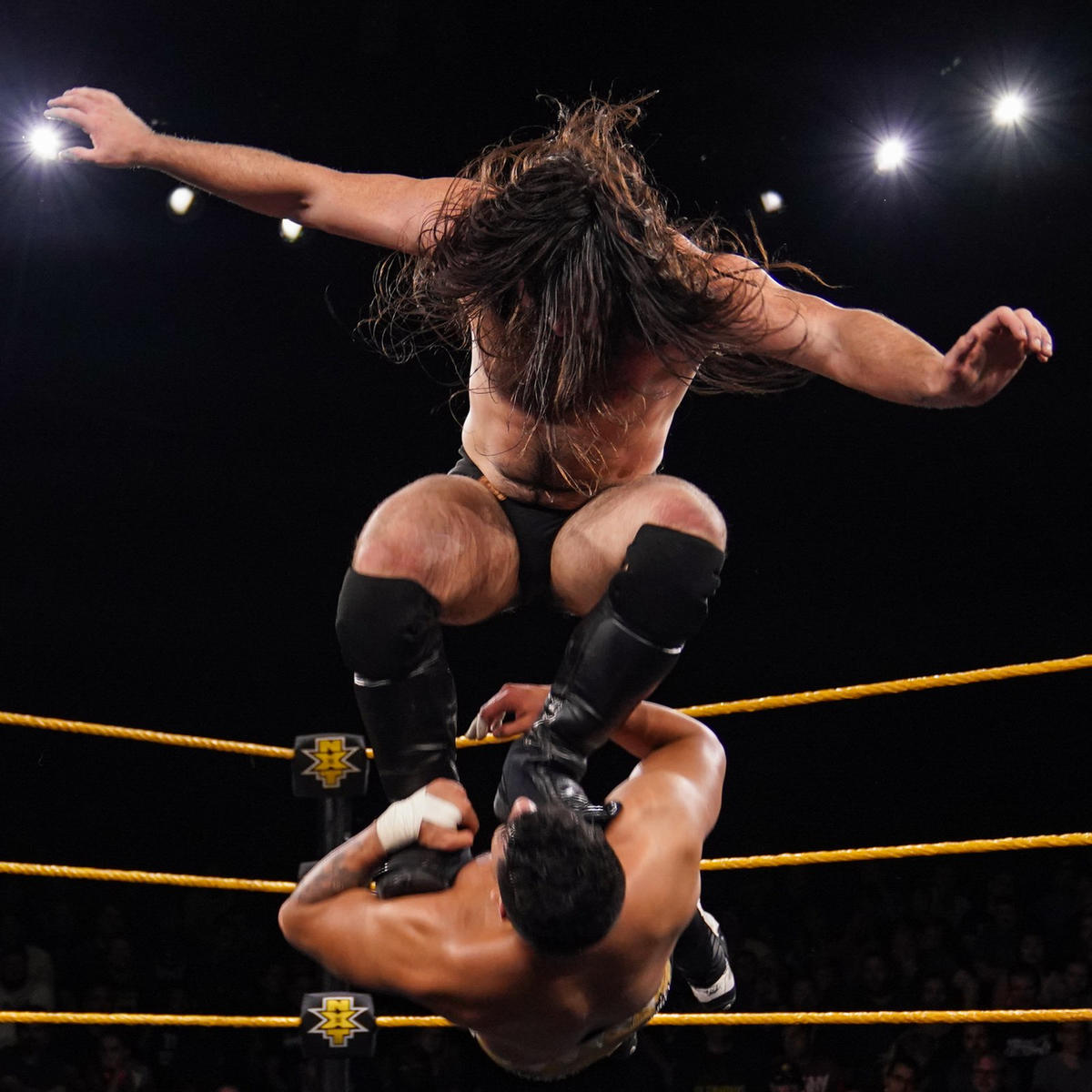 This match was a little bit longer than Grimes’ match last week. NXT continues to push Grimes as a major player after losing in the finals of the NXT Breakout Tournament. We were able to see a lot of what these two can offer here as we move forward with the Live Era.

Mendoza continues to push himself, as I think this was his best showing since joining NXT. A lot of back and forth, showcasing what both he and Grimes bring to the table. Ultimately, Grimes was able to gain the victory with the Running Stomp, but this match certainly is worth checking out! 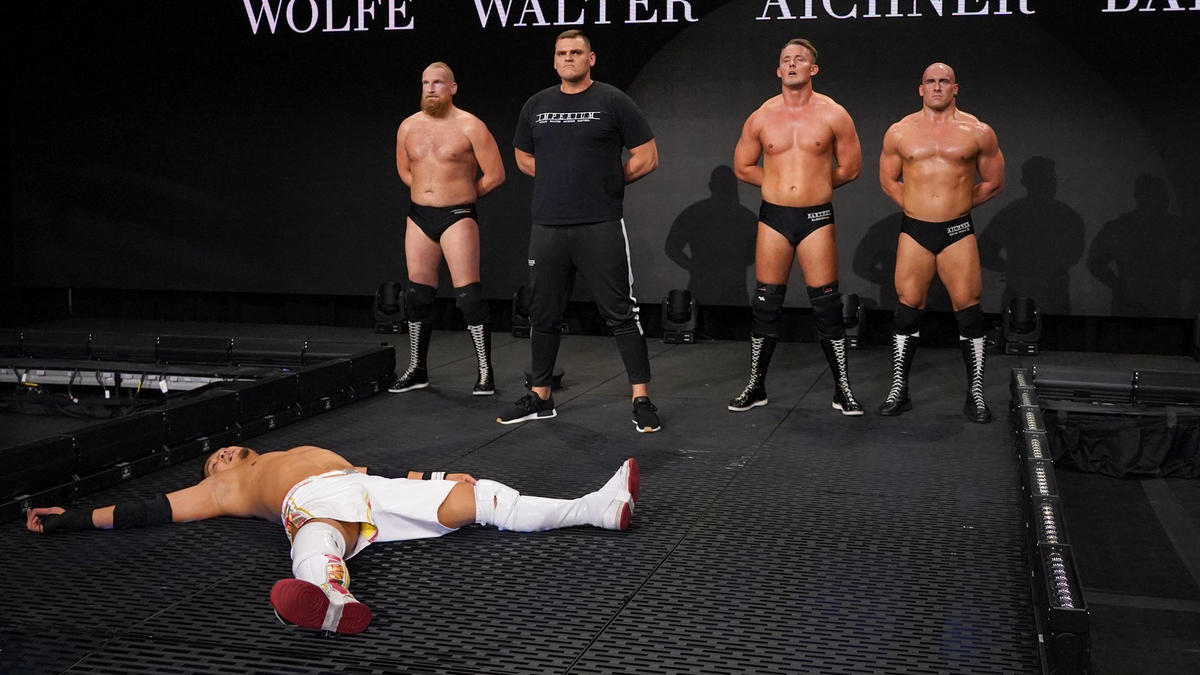 For those who don’t watch NXT UK or read Brandon’s weekly review, KUSHIDA choosing Breezango as partners certainly peeved Imperium, who want pure wrestling in the ring and not any nonsense.

I will continue to say this, but bringing Breezango to NXT was the best thing for these two. It reignited them both in character and in the ring, as we have seen some of their best work in the past month.

Unlike a lot of 6-Man Tag matches on Raw and Smackdown, this one brought together a great pair of storytelling and stellar Tag-Team action. While it wasn’t the best match of the night, it was certainly entertaining. KUSHIDA was able to get the win with the O’Connor Roll. After the victory, KUSHIDA made his way to the stage by himself, which I think everyone knew was a bad idea, as WALTER nailed him with a Big-Boot to the head. We went off the air tonight as Imperium stood tall on the stage over a fallen KUSHIDA.

Another absolutely outstanding week. Next week we have three title matches, as well as I am sure a few surprises. It was announced that next week’s episode will have limited commercial interruptions, as NXT is going all out in it’s first week with All Elite Wrestling! Speaking of AEW, make sure you check out Joe’s recap next week of the first episode of AEW Dynamite. Continue to check out my reviews for NXT, as well as follow me on Twitter @TJoftheJK. We’ll see you next week!