Wednesday, October 2nd 2019 will go down in wrestling history. While it was originally set as the debut for All Elite Wrestling’s weekly television program, NXT officially made it a Wednesday Night War. I like to say Wednesday’s are for Wrestling, and that is exactly what it is! NXT, as it always does, put together an unbelievable show, here’s how it went down.

Any other night, this would be an epic main event, but on this night, we are starting off NXT with a bang! These two have a lot of chemistry, and had the crowd firmly divided from the get-go.

This match had unbelievable pace. Matt Riddle kept the match moving at a rapid pace, while Cole slowed it down to where he likes it. I have been a fan of Adam Cole for quite some time, and have been waiting for him to be in this position in WWE. He, as he has done every match throughout his run as champion, continues to show why he is one of the top stars in WWE.

While this is commonplace for Adam Cole, this was probably Matt Riddle’s best showing since joining the roster. While Riddle has had some good matches, his chemistry with Adam Cole blended so well and showed us the Matt Riddle that was considered one of the top free agents before signing with NXT.

During the last act of the match, there was literally one person in the front row sitting! Everyone else in Full Sale Live was standing, as both of these stars continued to push each other to the limit. Ultimately, Adam Cole was able to squeeze out the victory. 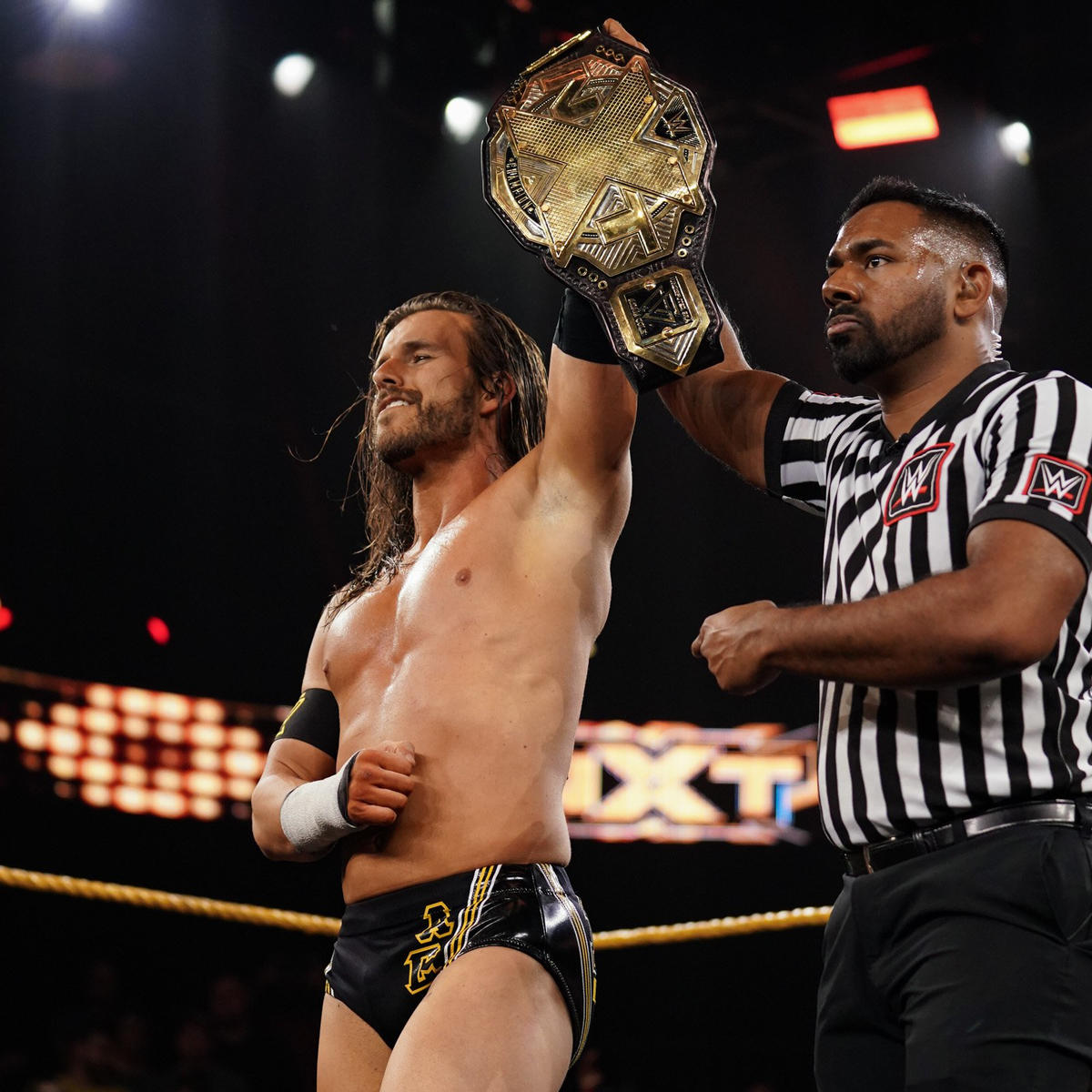 After the match, Adam Cole raised his championship in the air, only to be interrupted by Finn Balor! That is right, Finn Balor made his return to Full Sail and shocked us all. Finn grabbed a mic, and let Cole know that as of now, he is NXT. Triple H wasn’t lying when he said NXT isn’t a developmental brand anymore!

Velveteen Dream was next, on a new piece of furniture with his ladies. He let us know, in his Velveteen Dream way, that he has no issues taking on one man at a time, and he has his eyes on Strong and his North American Championship. He asked Strong if he is a man, and if he could take on the Dream one on one, without the shadow that is the Undisputed Era. Looks like Velveteen Dream is not done with Roderick Strong. 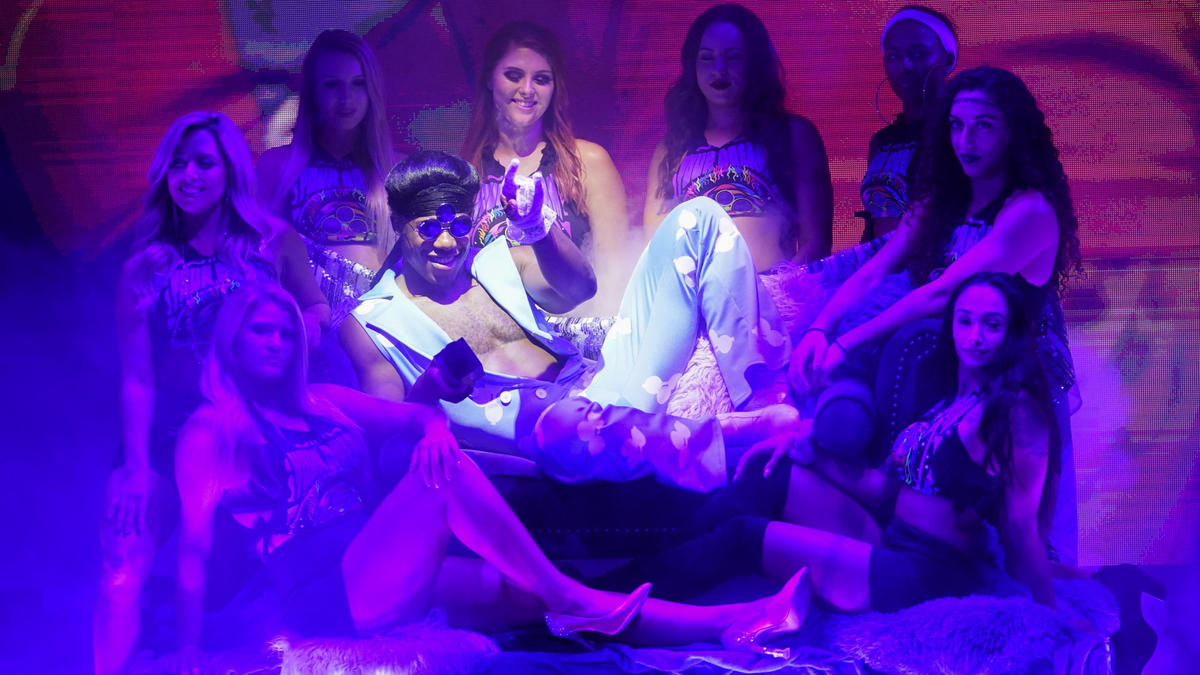 Mia has found herself in some pretty high profile feuds these days, and this match is no different. Io, who quickly is becoming one of the top heel females in NXT, used this match to continue to propel herself to that level.

Yim certainly is not the best wrestler on the roster. She is sloppy at times, but the veteran is good at selling and has the ability to make her opponents look good. That said, when she is paired with someone like Shirai, she looks like a legit champion. What sucked for this match is that it spent a lot of time in split screen, which didn’t help show us what these ladies can do.

Io, who arrived in NXT as ‘the Genius of the Sky’ known for her high flying action, as shown us more of her technical and physical work since turning heel, which only shows the depth of her skill. As, it seems every match today could have been a main event match on a normal NXT, Io pulled all stops to help win this one, even checking back to her high flying routes. Shirai ultimately won the match with her beautiful moonsault. It’ll be interesting to see where she falls in the NXT Women’s Championship contention after tonight, or if she interjects herself into tonight’s championship match!

We got a hype video for Tegan Knox’s return. I was surprised to see that she will find herself on NXT, as I was sure she would be one to help bolster that NXT UK brand. However, I won’t complain, as she is an outstanding superstar that has suffered some horrible luck in her time in WWE.

Shane Thorne’s character since being a singles star has been rather interesting. The whiny heel persona hasn’t really fit him well. He was outspoken to all of the competitors in the NXT Breakout Tournament, and tried to get Gargano to step aside and move on as he thinks it’s his time to sine in NXT.

A match with Gargano, who is one of the top stars here in NXT, made Shane Thorne look like he could be a contender. What this match did, that the main roster hasn’t been able to do well, is keep their top stars relevant in mid-card feuds. That’s right folks, Johnny Gargano is still a bit star in NXT, and was able to keep his shine bright it a match that wasn’t a main event or a title match.

Johnny Wrestling was able to get the big win over Thorne with a superkick. Props to Gargano, who even paid homage in the match by using one of his wife’s moves in the final act of the match. I’m interested to see where Gargano goes from here. His next opponent will surely show it’s head in the next few weeks, and just like anything Gargano touches, it’ll be a great feud! 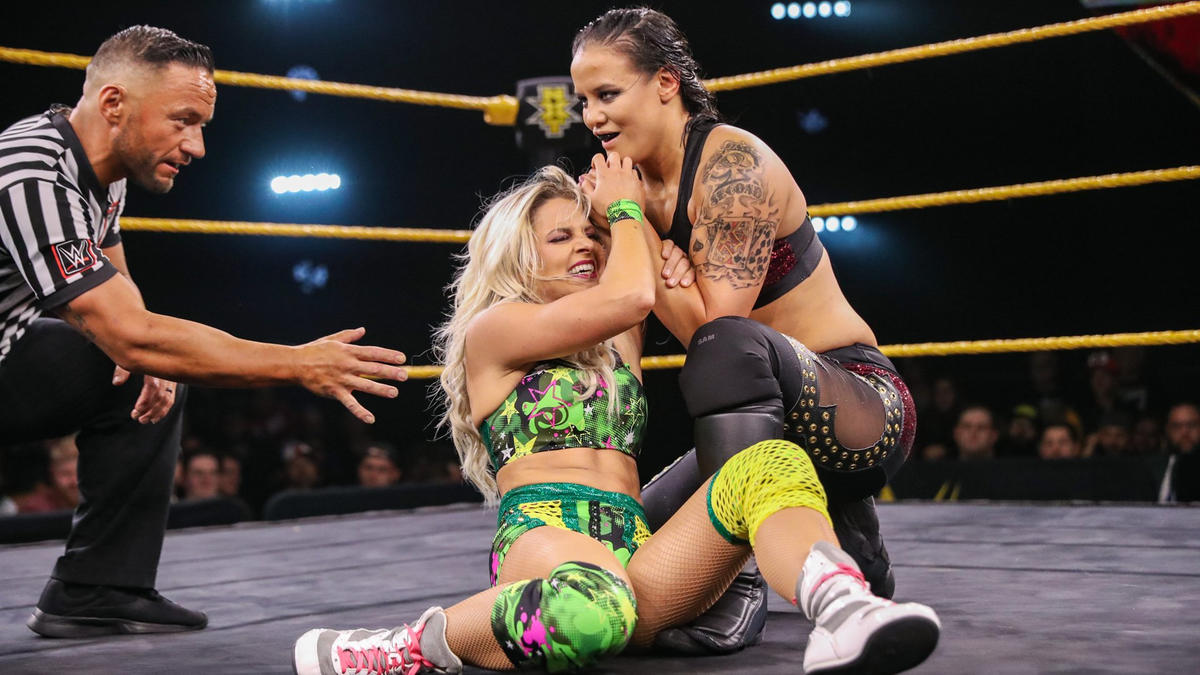 I was optimistic in this one, as we all know I’m a big Candice Larea fan. We are also at that point in Shayna Baszler’s feud where we, as fans, start to wonder who will be the one to dethrone her. She is quickly approaching the year mark since winning the NXT Women’s Championship at WWE Evolution last October, so it is only a matter of time before she drops the belt.

Baszler showed no mercy in this match. She, at one point, lodged Candice’s hand into the ring steps and kicked her elbow. Ultimately, this would be Baszler’s focus for the rest of the match.

Candice’s expertise in competing with men on the Indy’s certainly paid off, as she was able to counter Baszler’s strength and size, which most women in the division can’t do. Candice channeled her husband’s submission countering skills, at one point putting Baszler in a Kirifuda Clutch of her own. Ultimately, LaRae had to tap to Baszler’s Kirifuda Clutch, as she continues her reign as Women’s Champion. This was another outstanding match, one of Baszler’s best in what has been an outstanding and extremely underrated title reign.

This was an odd match when I saw it announced, however it was one that certainly delivered. Both men are known for striking and technical abilities, so naturally they paired really well. I have enjoyed the amount that Dunne has been showcased since returning to the NXT roster. He is a workhorse that I could watch weekly and be completely ok with it.

Burch, while normally I don’t think is anything special, had a good showing in this match. He has been in quite a few tag matches recently, so it was nice to see him in a one-on-one match, especially to the caliber of this match with Dunne. The Bruiserweight was able to get the victory with the Bitter End.

After the match, the lights shut off and Damian Priest attacked Dunne from behind. This is definitely a match I look forward to seeing. We know Dunne is a legit star, but this will be a match that could skyrocket Priest to the top of NXT real quick.

Cole is backstage with Cathy Kelley explaining that he didn’t use his hard cast to get a victory, he used his knee and his skill. The rest of the Undisputed Era came to his side to complain about Finn Balor’s return. Cole told them not to worry about Balor, and to focus more on the Street Profits and keeping the prophecy of being draped in gold. 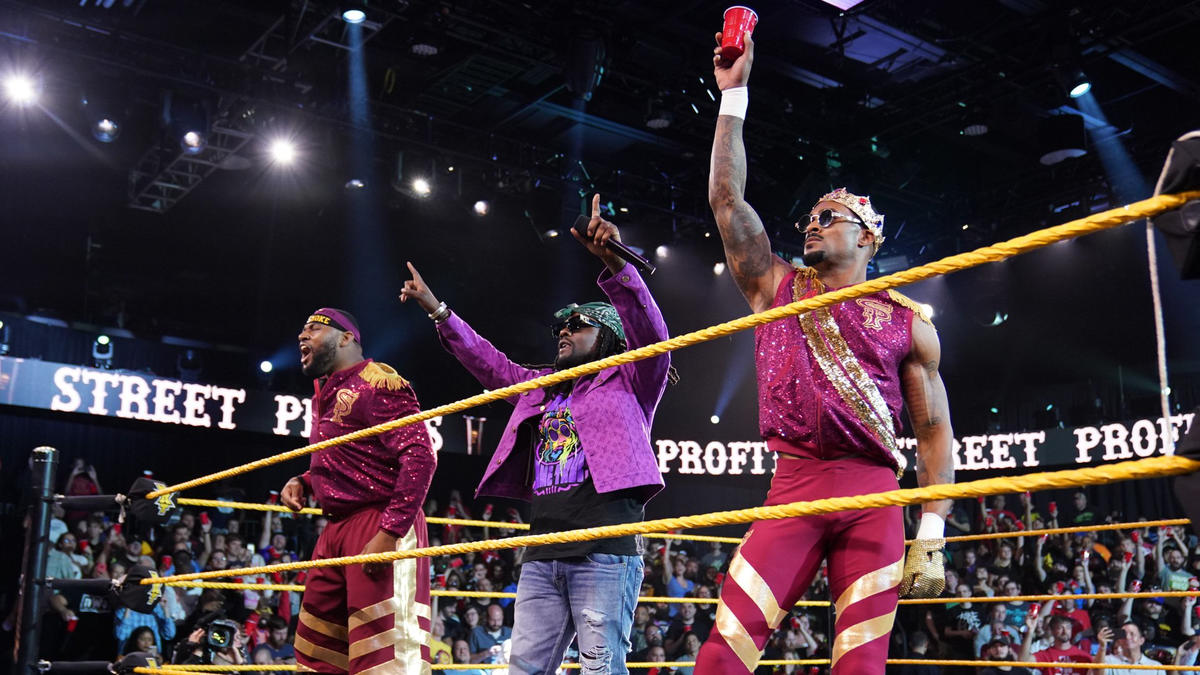 The Street Profits have come a long way since they debuted. Very quickly they have become one of the best tag team’s in the industry, as they are outstanding in the ring and on the mic.

I have said it before and I will continue to say it, Montez Ford is going to be a legit star. He nailed not one, but two picture perfect dropkicks to Bobby Fish at one point in the match. I haven’t seen a dropkick that good since Randy Orton’s rookie year!

Fish and O’Reilly showed us, as they always do, why they are one of the best Tag Team’s in the industry. Both utilized unique offense as they worked to defend their NXT Tag Team Championship. This, paired with Montez Ford’s unbelievable selling availability made the Undisputed Era look like an unstoppable Tag Team.

Angelo Dawkins, who was part of the Street Profits’ comeback, showed us just how far he has come. Just a year ago I didn’t think he belonged anywhere near Fish and O’Reilly. Now he held his own, and looked great doing it!

Montez Ford had the moment of the match when he jumped over the turnbuckle onto the Undisputed Era, who were brawling with Dawkins. Ford climbed back up to the top rope and looked to finish the match, but Roderick Strong came down to distract Ford. This led to the Street Profits demise, as a distracted Ford was pulled off of the top rope and finished.

Strong celebrated in the ring with O’Reilly and Fish, as Adam Cole came to the ring and raised his title. The Undisputed Era’s special moment was rudely interrupted when Tommaso Ciampa’s music hit. We went off the air with Ciampa and Cole face to face.

What an outstanding way to begin a new era of wrestling. NXT did a great job continuing to show that they are the top brand in WWE, and they are by no means a developmental brand. With a few major returns this evening, paired with outstanding matches, NXT continues to dominate pro wrestling.

If you didn’t watch it for yourself, I highly recommend you check it out. Continue to follow me on Twitter @TJoftheJK, as well as check back here for all my reviews each week if you can’t get to NXT. And, if you are an NXT fan through and through, make sure you check out Joe’s weekly AEW recap to see what happened over on TNT while NXT is going on.