This week’s episode started off with Toni Storm vs Killer Kelly. This was Storm’s first NXT UK match since losing her belt to Kay Lee Ray at the last TakeOver. Storm would make quick work of Kelly and get the win with her Storm Zero. After the match, Storm got a mic to talk but before she could say anything, Ray would attack from behind. Piper Niven would then come to the ring to assist Storm. Niven offered a hand to help Storm up but she smacked her hand away and walked off. 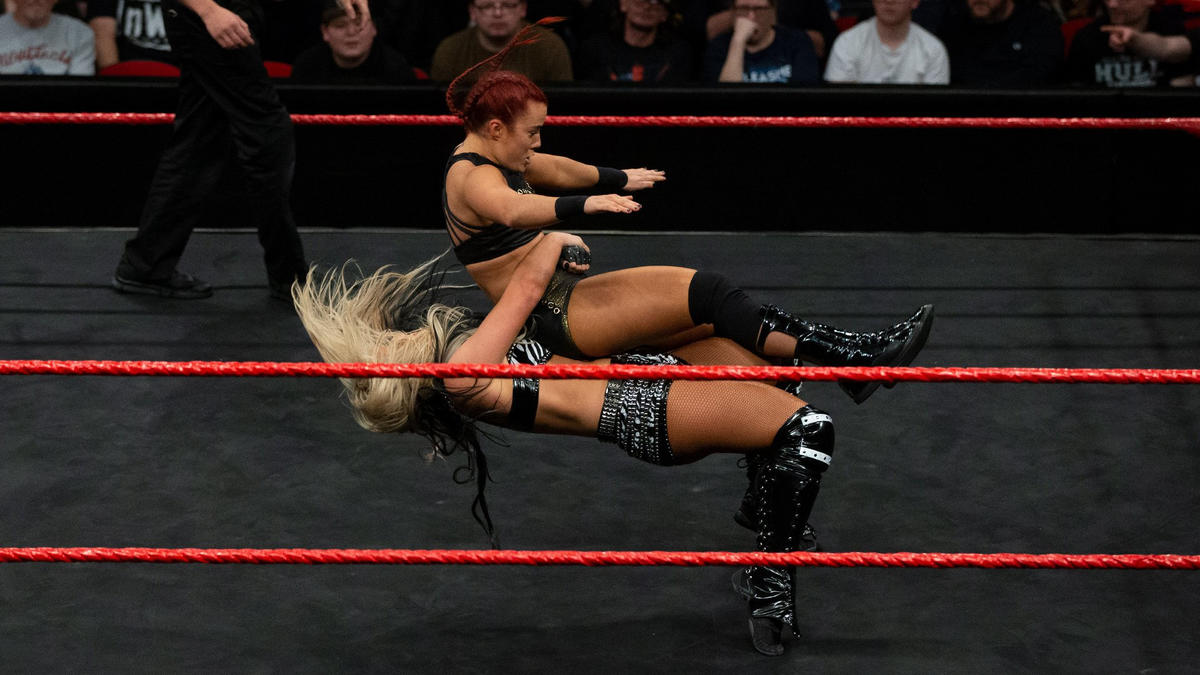 Following this we see Niven and Storm arguing backstage after her match. Storm tells Niven she doesn’t need her help then walks off.

The second match of the show was The Hunt vs The Outliers. The Outliers consisted of Riddick Moss and Dorian Mak. I didn’t know what to expect here, but the Outliers were in control for the majority of the match. Then out of nowhere, The Hunt had a sudden adrenaline rush and took over. They would then deliver three separate top-rope diving headbutts followed by a double top-rope diving headbutt to get the win. That’s a lot of headbutts. 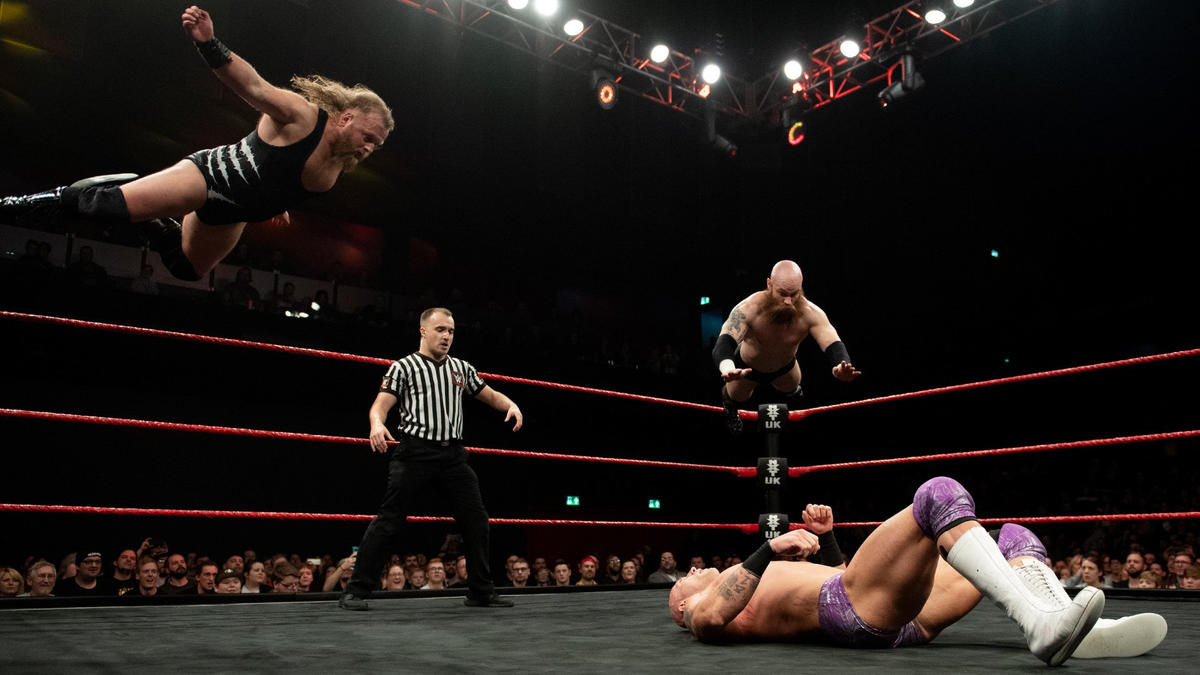 Next up is the third match with Jordan Devlin vs A-Kid. Tyler Bate would come ring side to support A-Kid, but there was no interference from him. A-Kid has been showing some potential in every match so far with some great technical wrestling and silky smooth moves. Early in the match though, A-Kid hurt his knee and Devlin would focus on that going forward. Devlin would eventually deliver his Devlin Inside while staring down Bate while pinning him.

We then go backstage Jinny and Jazzy Gabert. Jinny says everything is absolutely fine between Jazzy Gabert and her after losing to Piper Niven. Gabert re-confirms while leaning onto Jinny. After Gabert walks off, Jinny brushes off her arm where Jazzy was leaning on. I don’t know what they are going to do with this, but there’s no way Jinny is going to steer away from being a heel.

After that was the final match of the show. It was a triple threat match with Joseph Conners vs Ligero vs Travis Banks. This was an all around great match where everyone had their moments. Ligero and Banks started off double teaming Conners. There was a spot where everyone did their finisher back to back to back, but the match kept going and the crowd was getting really excited. In the end though, Conners would deliver his a Dont Look Down to Banks after he knocked Ligero out of the ring to pick up the win. Once again, great match!

Next was a segment with Kassius Ohno. He says he’s had time to reflect on his match with Tyler Bate and advises us that Bate was irritating him too much where he wasn’t able to focus. He says he is still the best British wrestler alive.

The final segment consisted both NXT UK managers in the ring calling down Joe Coffey and Walter to join them. Once they both made it, Coffey told Walter he wants the title. Walter says he doesn’t back down from a challenge. But some things must be satisfied beforehand. First, they want shot at the tag titles. Second, Dragunov must face Wolfe in a no DQ match. Coffey advises that Dragunov is not in his group and has no say so on what he does. Dragunov comes ring side and accepts the match.

Scala makes all the matches official. The tag titles will be contested next week, the no DQ will be scheduled at a later date, and Joe Coffey will he his title shot at TakeOver: Blackpool. This will make two times now that Coffey has been in the main event for TakeOver.

After everyone left the ring. Walter called Dragunov to the ring. He tells him that he just made a big mistake. We then see Wolfe grab Dragunov from under the ring while the rest of Imperium make their way to the ring and destroy him. The show comes to a close with Wolfe powerbomb gonna Dragunov through a table in the ring. 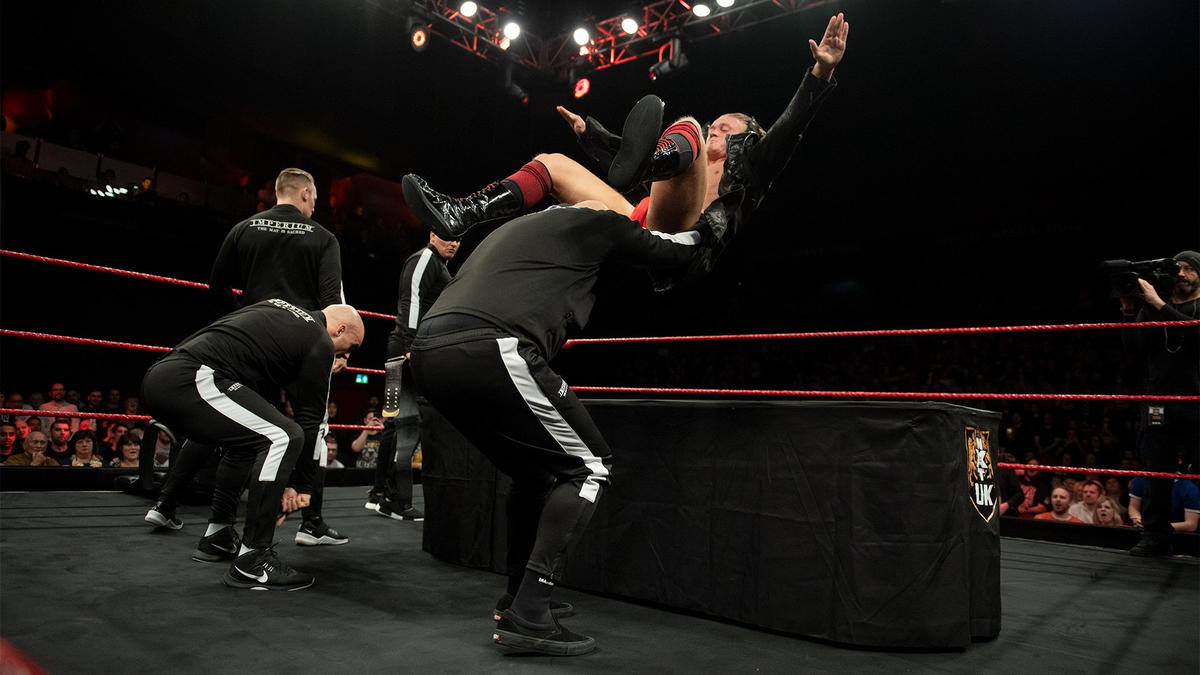 And that wraps it up for this weeks episode. Next week, Gallus defends their tag titles against Imperium. Thanks for reading and long live wrestling!